Ajax booked its sixth consecutive victory in the Eredivisie on a visit to FC Emmen on Saturday. The team of trainer Erik ten Hag won very easily with 0-5 at De Oude Meerdijk.

Halfway through Ajax already led 0-3 by goals from Davy Klaassen, Zakaria Labyad and Lassina Traoré, after which substitute Jurgen Ekkelenkamp and Quincy Promes were accurate in the second half against the weak Emmen, which created almost nothing.

Ten Hag was therefore able to make frequent changes and give players a rest. Seventeen-year-old defender Devyne Rensch made his debut as a substitute.

Due to the big win, the lead of leader Ajax on number two Vitesse rises to five points, but the Arnhemmers will still play at home against Fortuna Sittard at 12.15 on Sunday and then PSV, Feyenoord and AZ also come into action. Ajax’s next game is the Champions League match against Liverpool on Tuesday at Anfield. Sean Klaiber was given a basic place as left back from trainer Erik ten Hag. (Photo: Pro Shots)

Base place for Martínez, Not blind at selection

Three days after the 3-1 win over Midtjylland and three days before the confrontation with Liverpool, Ajax hoped not to have to make too much effort at FC Emmen. Trainer Erik ten Hag gave Nicolás Tagliafico and David Neres a rest on the bench, while Daley Blind did not travel to Drenthe. Lisandro Martínez and Sean Klaiber were in the starting line-up, as well as Antony, who made his comeback after injuries.

With those new names Ajax never ran into problems against Emmen and within half an hour the match was almost decided. The first Ajax goal was credited to Klaassen after twenty minutes, who set up the attack himself. Via Noussair Mazraoui and Traoré, the ball came back to the Orange-international, who lobbed through the leg of FC Emmen defender Miguel Araujo (0-1). Nine minutes later Klaassen was the principal and Labyad shot the ball out of the air behind goalkeeper Felix Wiedwald (0-2).

The 0-3 also fell before half time and that came in the name of Traoré. The striker from Burkina Faso tapped in a cross from Antony after 38 minutes. 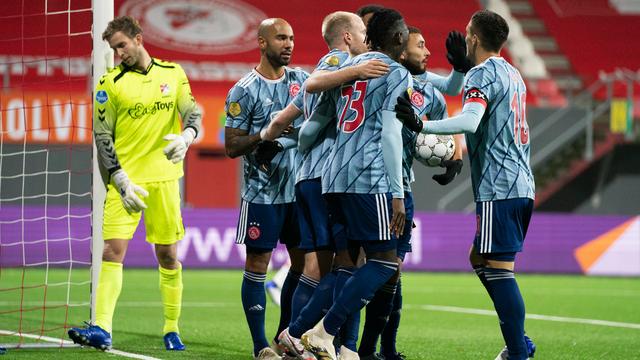 Rensch makes his debut at Ajax

The wide margin for the all-powerful Ajax gave Ten Hag the opportunity to give more players a rest halfway through. Dusan Tadic and Traoré were left in the dressing room and Klaas-Jan Huntelaar and Promes were the replacements. After ten minutes in the second half, Ryan Gravenberch and Antony also went to the side.

Even with all the changes Ajax kept control, but the score did not increase any further. A free kick from Labyad went just wide and Wiedwald tapped a shot from substitute David Neres out of the corner. In the 69th minute it was hit. When there was a rumble in front of Emmen’s goal, the ball reached Ekkelenkamp via Huntelaar, who tapped in (0-4).

Promes also scored his goal. Eight minutes before the end he determined the final score at 0-5 by tapping in a cross from Neres. Huntelaar also seemed to score, but that goal was rejected due to offside. The 37-year-old striker is one goal away from the 150 Eredivisie goals and will have to wait for that milestone. View the program, the results and the position in the Eredivisie