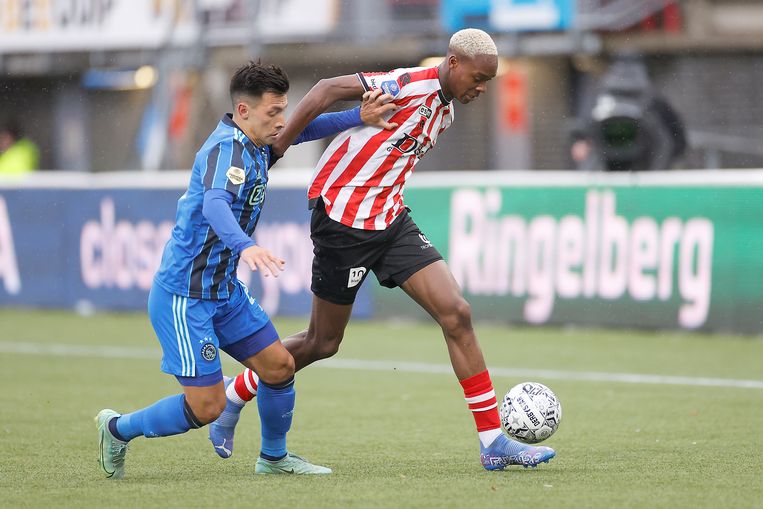 ‘This was my toughest match ever,’ Emanuel Emegha sighs after Sparta-Ajax (0-1). ‘In labor, especially in dueling.’ Whoever interviews the Sparta striker, coveted by many big clubs, should, as a rule, look up. The 18-year-old Emegha is 1 meter 95 tall. With the match he becomes more sinewy, he invests a lot in his body, with the plan to make a top transfer one day.

But Emegha constantly lost out to Ajax defender Lisandro Martinez, who is twenty centimeters shorter. That was annoying for Sparta, because the game plan was to close things with ten men and send high balls to Emegha. Emegha on Martinez: ‘He can jump high, time well, but is also cunning. Just before I wanted to jump I got a little push in the back.’

Martinez was one of the few Ajax players to score a more than sufficient Sunday afternoon in a bitterly cold, almost empty Castle, four days after he had done some expert defense work in front of 20,000 Turkish spectators during a visit to Besiktas with an assist and front assist. The 23-year-old Argentine has been in excellent form for nearly a year, but is rarely discussed.

Also on Sunday, it is coach Ten Hag and captain Tadic who grab the attention after the game, which is poor in terms of entertainment. They grumble a lot on the artificial grass in the Sparta stadium. ‘A scandal, that shitty grass’, said Tadic, who signed for the only goal. ‘Footballers are fifty percent worse at it.’

So Martinez was not. The fact that Ajax only conceded two goals in the Eredivisie, and only three in the Champions League, must be largely attributable to him. But the international top striker Erling Haaland (1 meter 94) was needed to shift the spotlight more towards the stocky Argentinian. The acclaimed Norwegian had a difficult evening against the almost clear Martinez during Ajax-Borussia Dortmund. The defender, now a permanent selection member of the Argentine national team, operates equally stoically against strikers of less fame.

The figures from the statistics agency also prove that opta. Of all Ajax players this season, Martinez is responsible for the most interceptions, recaptures and duels won (on the ground and in the air), but he also sends the most passes. After his much more frequently featured companion in the back of Jurriën Timber, he does this most accurately. Although his nickname is ‘the butcher’, he only commits one offense per match, the least of all Ajax defenders.

Martinez is therefore a great sign for his previous club with the fascinating name Defensa y Justicia, from which Ajax bought him in 2019 for seven million euros. The man from Gualeguay (six hundred kilometers above Buenos Aires) had to be patient in Amsterdam. With the more reputed Daley Blind and Nico Tagliafico, the competition was fierce. Partly due to the language barrier, he did not mention externally that this was difficult for him. His environment told him that his time would come.

It started midway through last season and extends to the present. Blind is now left back, Tagliafico is on the bench.

Martinez is not a spectacular player, he is barely noticeable off the field. On Instagram he was almost childishly delighted with his hundredth match for Ajax. “It means a lot to me and I’m really proud to have been part of so many games for this fantastic club. Let’s go for many more!‘

Martinez, who recently signed up, comes from a humble background. Mother and father had two jobs to keep their heads above water. The great Newell’s Old Boys from Rosario wanted to take him into their boarding school, but Lisandro wanted to contribute to the family’s income as a bricklayer. Until his father grabbed him while he was at work and said, ‘See this isn’t for you, idiot? Pack your things, your future is in Rosario’. ‘I’ll never forget. I was twelve or thirteen years old,” Martinez told Efe news agency.

‘body! body!,” his teammates hissed on Sunday afternoon as they went deep and Martinez got the ball. A tailor-made deep pass to Mazraoui or Tadic followed. But Martinez’s nickname also sounded when the strong Sparta defender Beugelsdijk came forward in the final phase. Martinez immediately moved towards the tall Spartan.

Especially when attackers Haller (ill) and Antony (slightly injured) are missing, and designers Blind, Berghuis and Tadic are having a bad day, it is nice for coach Ten Hag to be able to build on the stable Martinez. ‘We didn’t give anything away,’ the coach concludes for the umpteenth time this season.

Sparta striker Emegha still reveals a dirty streak. “He sometimes gives an elbow when no one is looking. That’s part of it. These are the best lessons for me. I learn a lot from this.’