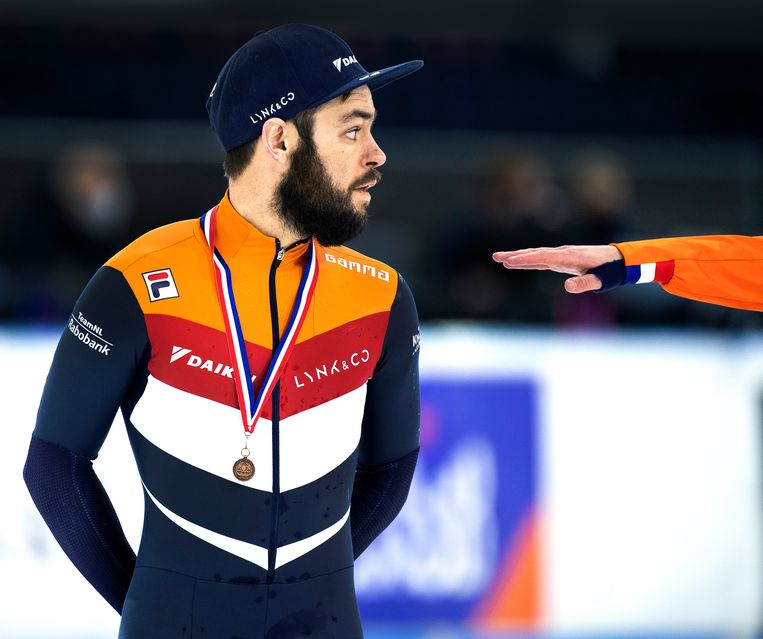 He is exceptionally off his room. Corona measures in Poland are strict. Knegt and his teammates are only allowed to leave their hotel to go to the ice rink. A walk around the hotel would be possible, were it not for half a meter of snow. ‘A breath of fresh air or a cup of coffee somewhere with your teammates, that’s not an option right now. We really have to stay in the room. ‘ Breakfast, lunch and dinner are also delivered there.

The restrictions do not affect the 31-year-old Knegt. He is looking forward to his return to the European Championship, where distance titles, an all-round classification and the relay title are at stake. “It is great to compete at the highest level again.”

Quite a lot has happened since the 2018 European Championships in Dresden where he won the 500, 1,000 and 1,500 meters, the final classification and triumphed with his teammates on the relay. In the last days of 2018, he became trapped between his forklift and the wall of his garage. He was so injured that he had to skip the 2019 European Championship in Dordrecht. A few days before that tournament, he set himself on fire in an accident with his wood-burning stove. Thirty percent of his skin had to be transplanted.

His rehabilitation took so long that a year ago, according to national coach Jeroen Otter, he was not yet fit enough to make his return to the European Championship. He was only allowed to return to the ice later, at the World Cup Final in Dordrecht.

Even this winter the accident continues. He has regained his speed for a while, but his recovery and endurance capacity remained below par for a long time. In recent weeks it has been much better and he feels almost at his old level.

And so he also sees his old role in the team relief, the relay, for himself again. Knegt was always the finisher, the one who has to settle the case for the team in the last two rounds. After his accident, Itzhak de Laat took over that role. He did that well, so it is not a foregone conclusion that De Laat will just have to give up his place again.

Otter enjoys the fact that Knegt is openly applying for the position of slot driver. ‘That gives me energy, from those kinds of guys who say what they feel.’ It is only good that he has that ambition again, says the national coach. ‘Then he will also act like a finisher. And the finisher is somewhat the captain of the team. ‘

As captain and finisher Knegt can do some extra. Such as during the 2017 World Cup in Rotterdam, where he won the relay gold. Otter: ‘He was suddenly gone. Then you think: how is that possible? Who shot him here? That is great. I’m not sure if he’s capable of those energy boosts now, but maybe he is. ‘

During the European Championship, Otter will vary in the composition of the relay team. Normally he would have used the World Cup competitions for this, but they have all been canceled this winter. The drivers have to wait and see who will ride when and in what position. The national coach only decides this just before the match, based on the form of the day. ‘That is always announced to the team half an hour in advance. That won’t be any different this time. ‘

For the first time since 2008, 33-year-old veteran Daan Breeuwsma is missing from that team. Otter, in addition to Knegt, De Laat and Dylan Hoogerwerf, preferred Jens van ‘t Wout (19) and Friso Emons (22). The young guard has to gain competition experience somewhere and that is really only possible at the European Championship this season. The World Cup, in Dordrecht in March, is too important for that.

Knegt has to get used to being on the road without Bruiksma. The two have been together since childhood. ‘I make the best of it. I hope he does that at home and that he will be back at the World Cup soon. ‘

Despite his good form, Knegt is not yet ready to count himself among the favorites at the European Championship. It is guesswork how he will relate to his opponents, especially the Russians and the Hungarian brothers Sandor Shaolin and Shaoang Liu. “I still understand the game, but what is it worth to the rest of Europe?” That is the challenge for the European Championship weekend that starts with preliminary rounds on Friday.

He may not know exactly where he stands, that also applies to his opponents. Knegt: ‘There will certainly be people who will underestimate me. That can only have a positive effect. ‘


The women’s favorite is Suzanne Schulting, reigning European and world champion. She does not know exactly who she has to fear. The European Championship is the first international meeting of the winter. And so she looks broadly. “I have to take everyone into account.”

Yet she also knows that she is the woman to beat. That doesn’t frighten you. She is only delighted to be able to compete for the title again. ‘I notice that it gives me a lot of energy. It’s about something again. That makes me happy. ‘