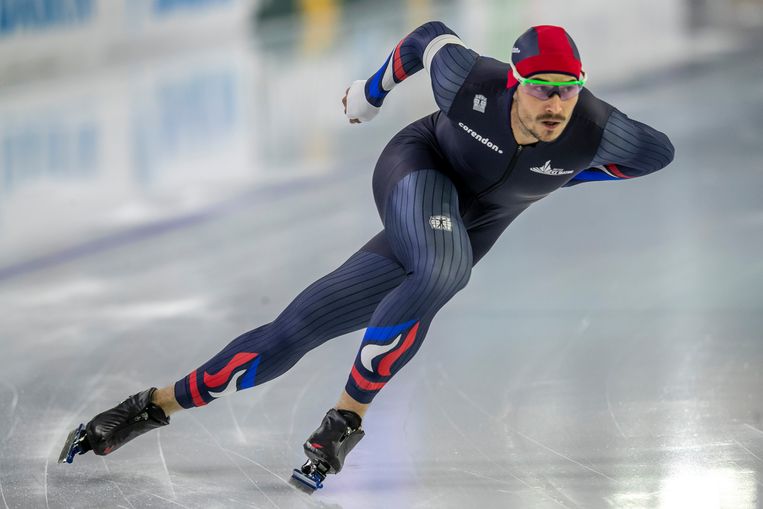 Cornelius Kersten had ‘no idea, no idea’ when he decided to skate for Great Britain in 2014. And to be honest, he was quite disappointed. The arrangements, the scraping of money, especially the lonely training hours. Actually, he did not even expect that he would still skate now, but finally there is the reward: he can go to the Olympic Games in Beijing.

For example, for the first time since Craig McNicoll in Albertville in 1992, a Briton is participating in long track speed skating at the Winter Games. Due to his good performances in the World Cups, he received the green light from the British Olympic Committee to compete in the 1,000 and 1,500 meters.

He already had the good news when he also finished fourth in the 1,000 meters at the European Championships in Heerenveen this weekend. As the first Briton, and actually also the fourth Dutchman, because he grew up in Heemstede and has both nationalities.

‘Skating is a bit of a game for me’, says Kersten (27) about his choice to come out for his mother’s country. ‘And I really want to play it out, reach my maximum potential.’

As a junior he ran against the national top in the Netherlands, sometimes he made it to the podium, but that didn’t happen more often. When he got injured, it was clear that he would not progress. “You’re done in the Netherlands if you can’t scale up to a bigger team and at that time I couldn’t do that. Through England I was able to develop further and progress step by step.’

Kersten just hadn’t realized what all it would take to be able to continue with his ‘game’. Long track speed skating was completely on its ass in Great Britain. There was no support from the union, no structure, really nothing at all.

‘People came from short track and figure skating’, says Kersten about the early days. ‘They didn’t know the long track at all and had no idea what it needed. There are still no 400-meter tracks in England, so we can’t train anyway. But they do help a lot with the administrative side, which takes a lot of stress away.’

Kersten spent some time in Calgary, where he trained with the Canadian Skating Federation’s training team. But in recent years he has lived in Heerenveen with his girlfriend Ellia Smeding (23), who also has a British mother and also plays for Great Britain. She just failed to qualify.

Because it is not that easy to reach the Games via the British route. In the Netherlands, competition is the biggest problem. Certainly also in the 1,000 meters, Kersten’s favorite distance, on which even Olympic champion Kjeld Nuis did not qualify. But the British are a lot stricter since the world was in turmoil over ski jumper Eddy ‘the EagleEdwards. Kersten is certainly not such an amateur, in the last three World Cups he finished ninth twice and tenth once.

‘Last year’s corona skating bubble turned out very well for me,’ says Kersten. ‘I wouldn’t have been able to train without Dutch top sport status. In that bubble I was able to take steps again. And in the end I came 11th at the World Single Distance Championships, I was very happy with that.’

Partly because of that performance, he came into the sights of the Worldstream Corendon team of Koen Verweij and Jutta Leerdam, which he has been part of since the spring of 2021. Years later, for example, something that had not worked after his junior days: joining a Dutch professional team.

“For me it’s the perfect situation, I get a lot of support and I especially have teammates with whom I can train together. That makes skating a lot more fun.’

It also provides financial relief. The team pays for training hours and other facilities. But to make ends meet, Kersten still needs other income. In addition to their skating careers, he and Smeding are therefore working on Brew ’22, a coffee company with a sports twist. The packaging has the Olympic colors and the different varieties have names such as Dreamcatcher, Underdog and Powerhouse.

‘The Powerhouse is our dark roast, a strong coffee’, laughs Kersten. ‘And the Underdog our decaf, for a coffee without caffeine it is much better than expected. It was born out of love for coffee, but it is also necessary. We’re growing, but I can’t spend as much time on it as I want, but hey, Brew is there for the skating, not the other way around.’

Skating is so much fun, he thinks, because it is very unnatural. ‘As humans, we have evolved to stand up straight and walk forward. What are we going to do? Sit deep and push off to the side. As a result, you are always learning and analyzing.’

The fact that he can put Great Britain back on the map as a skating country through that passion is a bonus. ‘I mainly do it to play the game for myself. But I would also like to do my part to get British speed skating back up. Maybe my participation gives inspiration to build a track again or that a few kids want to skate long track. I would be very proud of that.’