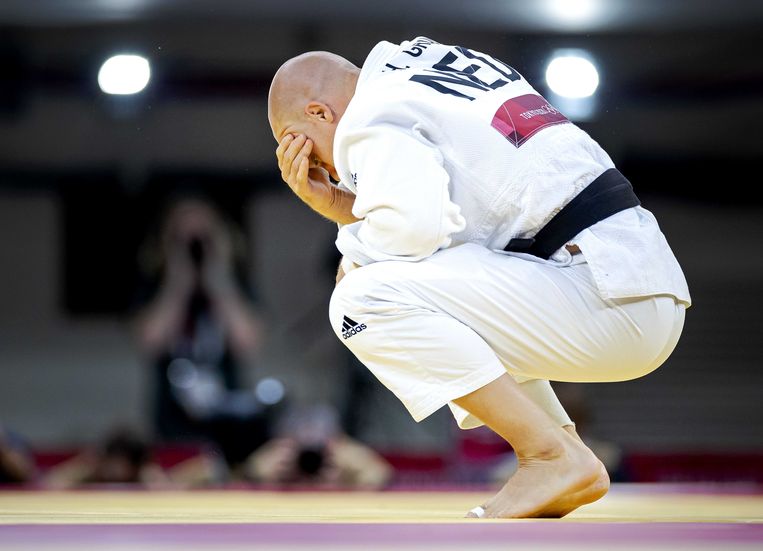 There he lies on his back. His hands folded over his eyes. The fight for which judoka Henk Grol (36) extended his career for five years only lasts 25 seconds. Now it’s over before he even realizes it. There is not a drop of sweat on his bald head. His judo suit is still uncreased.

In his last match as a judoka, the incarnate fighter doesn’t even get to fight. In the class over 100 kilograms, he is immediately surprised in his first match by the Uzbek Bekmurod Oltiboev: ippon. Gone Olympic dream. It is a painful end to an impressive but unsatisfactory career.

Of a judoka who fought not only against his opponents, but also against his own shadow. Because he knew of himself that he was the very best, but never became the very best. Because it had to work once, even if he didn’t have the time with him. He continued maniacally.

Driven by the love for the sport, but also by dissatisfaction and resentment. Despite his two bronze Olympic medals (2008, 2012) and three silver medals at the World Cup. Or maybe because of those bronze and silver medals. Believing that the ultimate reward was always close by, but in the important moments appeared further away than ever.

Grol self-destructed, only to find the courage and strength to carry on again. After his early elimination at the Rio Games, he announced the end of ‘the Grol era’. As a cumulative of the disappointments he’d endured and the constant pressure he’d put on himself.

When he was once announced as the number two in the world at a company presentation, it touched his soul. It was a reason for him to train even more. After the presentation, he immediately sent his car to the weight room, even though he had already trained three times that day.

Again and again, Grol straightened up. Although the best Dutch judoka of the past decade had to reinvent himself after Rio. He moved from the 100 kilogram class to the heavyweights (above 100 kilograms). More or less forced, yes.

Grol had lived his entire career as a monk. Outside the competitions, the three-time European champion grew to 110 kilos through strength training. For tournaments, he had to lose those ten kilos too much. He starved himself every time. He demanded the maximum of his body, and sometimes more than that.

That monomaniac way of life never earned him the desired Olympic gold medal or world title. In the fall of his career, he couldn’t and didn’t want to fight the pounds again. He scaled back his training work, because his worn-out body demanded it.

Moreover, he convinced himself that he could also be satisfied with a medal other than gold. It was his way of putting everything aside for one last time. To show the best version of themselves and compete for the medals. With an Olympic medal as the ultimate goal, at the place where heavyweight Anton Geesink gathered eternal Olympic fame in 1964.

With that conviction, he entered the tatami in the Budokan, the holy temple of judo, on Friday. But before he knew it, he was lying on his back defeated and his individual career as a judoka was over. Nota bene against a judoka of whom he said he should never have lost, but who threw Grol over his shoulder as if it were a lightweight.

Grol called himself a stupid prick in front of the NOS camera. He had gathered everything together to extract what was inside once more. But was the first to confess that he didn’t get it right at the most important moment. Not even fighting down.

He will be in action on Saturday in the team competition, a new Olympic part. It is no more than an obligation for the judoka who wanted to be the very best individually throughout his career, but received the hard confirmation in Tokyo that he would never be that again.