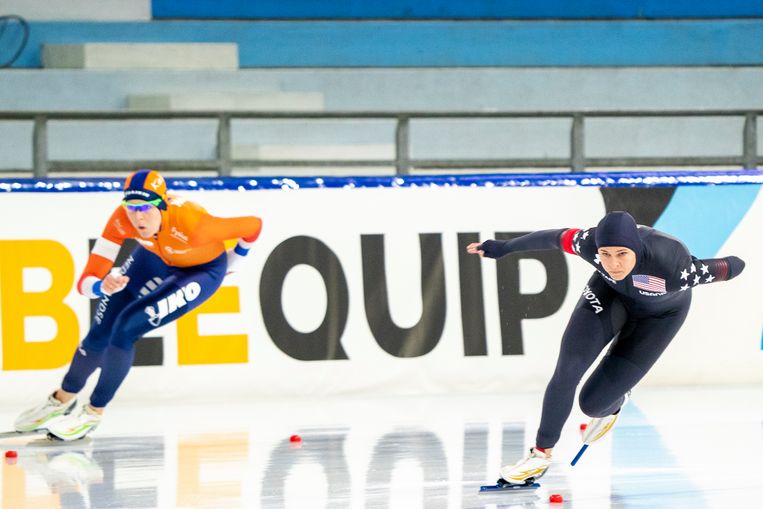 When the first crossing of the 1,000 meters is approaching, Brittany Bowe (32) squints. She has the orange skating suit of Jorien ter Mors in her sights and closes the gap to the 2018 Olympic champion with a number of aggressive strokes.

Bowe will not see Ter Mors back for the rest of the race. The American finishes in 1.13.96, making it 0.68 seconds faster than Ter Mors, who finishes fourth. Angelina Golikova (1.14.05) and Femke Kok (1.14.47) finish behind Bowe on the podium. Reigning world champion Jutta Leerdam was missing this weekend due to a foot injury.

On Saturday, Bowe was also the fastest over 1,500 meters in 1.53.45, ahead of Antoinette de Jong (1.53.81) and Ireen Wüst (1.54.22). It was Bowe’s second World Cup victory of the weekend and her fourth of the season in front of the empty stands in Thialf: she also won twice last weekend. She personally ensured that 1,000 and 1,500 meters for the women are the only individual distances on which the Dutch have not yet won. “I’m in great shape, that gives a lot of confidence for the World Championship Distances.”

Like many foreigners, Bowe suffered from corona restrictions this season. The American skaters were able to train in Salt Lake City, but in December the track was closed for two weeks due to a corona case. Bowe took the opportunity to go skiing. ‘That way I stayed a bit active.’

If anyone knows what it’s like to switch between different sports, it’s Florida-born Bowe. Between the ages of 18 and 22, she played basketball at the highest college level in the United States and was also a talented inline skatester. The Olympic dream took her to the ice rink. At the 2010 Vancouver Winter Games, I saw Heather Richardson and Chad Hedrick compete for the medals. They were my inline skating friends and I wanted the same. ‘

Within three years it grew to become a fixture in the medium distances. She still is. She is the world record holder in the 1,000 meters and became world champion in that distance in 2015 and 2019.

In between all the highlights, Bowe also had a lot of setbacks. With eighth place in the 1,000 and fourteenth place in the 1,500 meters, Bowe symbolized the failing American long-track team in 2014, which failed to win any medal at the Sochi Games. In 2016, a few months after Jillert Anema named her the best speed skater in the world, she bumped into a teammate at a recreational game of ice hockey.

She sustained a severe concussion, which left her unable to skate for nearly a year. The body could no longer control her blood pressure, and Bowe felt as though she might pass out on gentle walks. She had not recovered in time to finish individually on the podium at the 2018 Winter Games and only won a bronze medal in the team pursuit with Richardson and the Dutch-American Carlijn Schoutens.

Next winter it should be Games. She is 33 at the time and will have the last chance at individual medals in Beijing. “I have a lot more experience now than in 2014 and no more concussions like I did in 2018. If I stay focused and healthy, I have a good chance,” she says, snapping her fingers. “Staying healthy is also a matter of luck.”

Before she can complete her record with an Olympic medal, the World Championship distances are at the door. Her four World Cup victories in the 1000 and 1500 meters mean that Bowe will be the favorite for two gold medals at the World Distances Championships in a week and a half. Yet she knows better than anyone that a good general at the World Cups is no guarantee for World Cup gold. Last year she also won the World Cup classification in the 1,000 meters, but ended disappointingly in eighth at the World Cup distances in Salt Lake City. At 1,500 meters she even finished fourteenth.

She is still fed up with that disastrous World Cup, so much so that the extrovert Bowe still doesn’t want to say anything about it. “The stars were not in the sky as they should have been,” she says cryptically. “It was a very humbling experience.”

She is confident that a similar slump will not occur this year. Last season, she was extremely successful in the first three World Cups, then quite a few weeks without important games followed and she lost her form. “Now we don’t have such a gap between World Cup matches and the World Cup and it will be easier for me to maintain the momentum.”