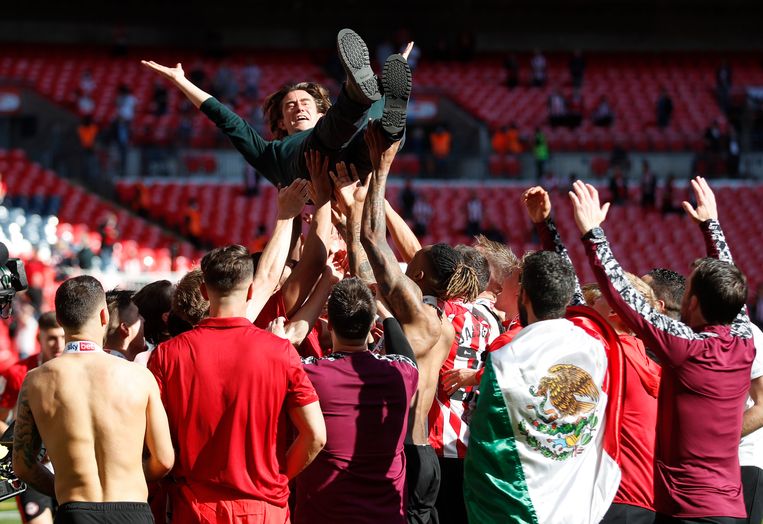 The NHS, Britain’s health care system, was yet to be established and London was still clearing the war debris when The Bees last played in the top division. This was followed by an almost endless sojourn in the lower echelons of English football, but in recent decades Brentford gradually climbed up.

Just under a year ago, in the season that it said goodbye to cozy Griffin Park, it was already on the threshold of promotion. On the last day of play it lost the second place. Then the final of the play-offs, against neighbor Fulham, was lost thanks to a mistake by the goalkeeper.

It was the ninth time that Brentford failed in the playoffs, but ten times it was a success. After two duels with Bournemouth, the team of charismatic trainer Thomas Frank proved to be too strong for The Swans. The 2-0 final score was already on the scoreboard after half an hour.

Only Bradford City has had to wait longer to return to the top of the English football pyramid. The performance of Brentford, who finished third in the regular season, is special as it lost its two best players last summer: Ollie Watkins went to Aston Villa and Said Benrahma to West Ham United.

Both attackers were sold for a big profit. For example, Watkins, an international by now, had come from Exeter City for converted two million to leave for 36 million. That goes for more players. Brentford has made 181 million euros in transfers over the past seven years, without slipping.

In addition to the good leadership of 47-year-old Frank, it is thanks to the Moneyball system, where players are bought on the basis of extensive statistical analysis. With a club like Brentford on a budget, smart sourcing is the only way to compete with wealthier clubs. There is no such thing as throwing money.

For the loyal fans, it is a shame that the beloved Griffin Park cannot see the arrival of Chelsea, Liverpool and Manchester United. It has been playing in a new stadium in Kew since last summer. On the other hand, Griffin Park would never have met the Premier League’s stadium requirements.