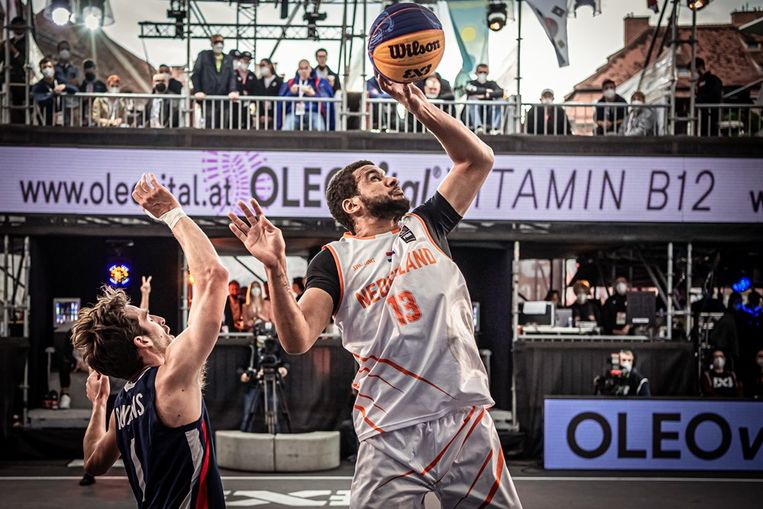 The party started on the field with the water bottles pouring over the head of basketball player Dimeo van der Horst, continued in the hotel lobby and was eventually moved to the gym, out of sight of the police (because corona).

The Dutch three-against-three basketball players celebrated a special achievement in Austria on Sunday: Van der Horst won a ticket for Tokyo together with Arvin Slagter, Jessey Voorn and Julian Jaring at the Olympic qualifying tournament. This is the first time in history that a Dutch basketball team is present at the Games. The team seized a unique opportunity in a new sport that will probably be stronger in four years’ time.

Olympic placement has always been an impossible mission in regular indoor basketball (five-on-five) for the Netherlands, which is in 44th position in the world ranking and only managed to qualify once for a World Cup (1986).

Three-on-three basketball is the souped-up variation where two teams of three players play against each other on a half-court with one basket.

The Netherlands immediately took the new Olympic discipline seriously and for that reason has been among the world’s top players for several years. The team is in fourth place in the world ranking, won two silver World Cup medals in 2017 and 2018 and hopes for an Olympic medal in Japan.

A few years ago, Dimeo van der Horst did not dare to dream of an Olympic adventure. The 29-year-old basketball player made the switch from regular basketball in 2017. He was immediately sold. ‘It feels like street basketball. I fell in love very quickly. It’s much faster, more intimate, harder.’

For Dutch top players, a switch to the smaller field is the chance to go to the Games. The big stars from other countries are not yet warm to it. Stars like LeBron James are currently busy with the playoffs of the top league NBA, and then focus on Olympic preparation in five-on-five basketball.

At the Olympic qualifying tournament, two players with experience in the highest basketball league ran around. Of those, 32-year-old American Robbie Hummel was actually retired to work on his social career as an analyst. The former Minnesota Timberwolves player made a fresh start when it gave him the chance to go to the Games. His dream does not come true. He lost with the Americans to the Netherlands in the quarterfinals.

Tokyo should become the party of the small basketball countries. To give others a chance too, countries that played in the regular five-on-five basketball of the international basketball association Fiba at the previous Olympics were only given one chance at an Olympic placement in the three-on-three variant. Many top countries from traditional basketball are therefore missing in the new discipline.

Some retraining is needed to make the switch, says Dutch national coach Brian Benjamin. ‘You have to be an all-rounder. Because the field is smaller you have to be able to play all positions. Defending, shooting, dribbling, being strong. If you’re a real specialist, you limit the squad. It’s like tennis. If you only have a good forehand, you won’t get there. ‘

For example, Dimeo van der Horst made sure that he could take a beating better. He followed a strict sports diet to become more robust. His 98 kilos, with a length of 1.98 meters, remained the same. But fat was lost and muscle was added. Now he can push and sprint better. ‘I have trained very hard to adapt my body. It is much more physical, contact is less likely to end. And you have to be able to sprint well.’ With a shot clock of twelve seconds, instead of 24 in regular basketball, there should be an attempt at scoring faster.

Although the Netherlands twice won World Cup silver, coach Benjamin does not dare to say what will happen at the Games. At the World Cup in their own country in 2019, the Netherlands was already eliminated in the group stage. The Olympic qualifying tournament also started dramatically for the Dutch team. An elimination in the group stage was only just prevented. A game of monopoly in the hotel brought peace back to the players’ minds. After that, things were put in order in the field. With the win over France in the semi-finals, the ticket was in.

Who will take off with the medals in Tokyo is a mystery to national coach Benjamin. ‘It’s one big lottery now, so many new countries are emerging. All teams are good. The shape of the day will tell. ‘ Besides the Netherlands, Serbia, Mongolia, China, Japan, Poland and Latvia have qualified for Tokyo. One ticket is still available for the winner at a second Olympic qualifying tournament in Hungary.