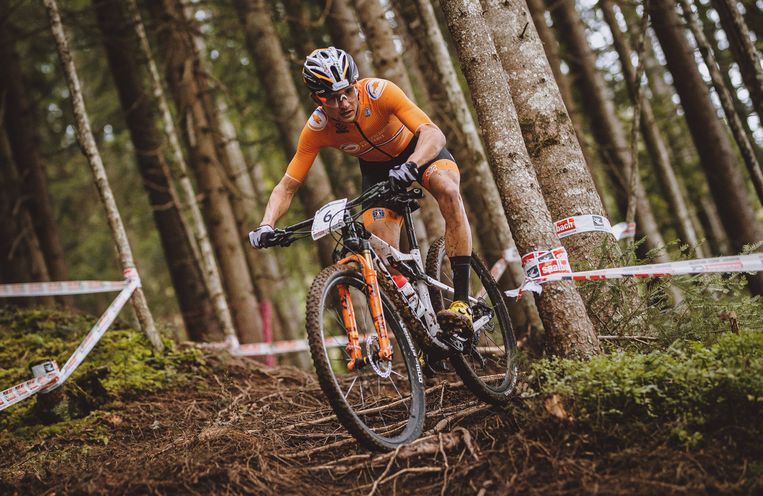 For fifteen minutes Milan Vader can dream of the title on the World Championship mountain bike. He will be in the lead on his own on Saturday. But then a Jordan Sarrou joins him. On a winding stretch of uphill, meandering through the trees, the Frenchman turns on and immediately takes a few meters ahead. While Sarrou starts the solo ride to his surprising world title, a nice result slips further and further from Vader.

How different he had envisioned it. In the days before the World Cup, Vader had the feeling that something beautiful was about to happen. ‘I’ve been dreaming about that all week. If it happens, I will go all out. ‘

It is Father’s second World Cup in the big men. Last year he fell and had to get off with a shin injury. This year it had to go better. Finishing alone is not enough. And so the 24-year-old Dutchman in Leogang, Austria, goes off from the start. ‘I don’t understand people who say that they are already happy to be able to participate. You should not go for anything but the highest possible. You will see later whether it works. ‘

When Sarrou drives past him after fifteen minutes, he notices how his raging start has taken hold. “Today it was perhaps a bit too enthusiastic,” he says afterwards. His agility suffers. He falls three times. He finishes 23rd after more than an hour of racing. ‘It is a course where you need full concentration to get down safely. I went a little too deep and then it is easy to make a mistake. ‘

A week before the World Cup, Vader had achieved his first podium place in a World Cup competition in Nove Mesto na Morave in the Czech Republic. He finished third. “I knew I was good, but I didn’t expect it to be this good.” Earlier this year he also won a strong match at Alpe d’Huez.

Tricks of the trade

Mountain biking is a small sport in the Netherlands. That is not surprising, says Vader. ‘In the Netherlands it is simply less fun mountain biking than in Switzerland.’ A lack of hills and challenging courses drove him away from home as a 17-year-old student from Middelburg. After obtaining his HAVO diploma, he relocated to Sittard. There he was able to immerse himself completely in his sport with a group of mountain biking talents and spend hours on the Watersley course. ‘We were working on it full-time. There I learned the tricks of the trade. ‘

His goal, back then in 2013: Tokyo 2020. His move paid off. He grew to the top of the world, finished third at the European Championship last year and won the coveted Olympic nomination. If the Games had been held this summer, he would have been there. Together with Mathieu van der Poel, who dropped the World Cup in Leogang in favor of this autumn’s spring classics.

At first glance, the muddy course in Leogang looked a bit like a cyclocross race, but the fierce gradients and lengths of the climbs would have thwarted the robustly built Van der Poel. Father, much more slender, had just been delighted with the round. ‘It suits me. It’s a lot of climbing, a bit of a stretch old-school round. ‘ Technically it was not too complicated, it would be tough.

Father had used the days before the World Cup to adjust his material to what he would get under the wheels. ‘That goes really far, almost Formula 1-like.’ From tire choice to the precise strength of the suspension. Everything was examined and adjusted down to the last detail. Everything seemed fine. But he ends almost four and a half minutes behind 27-year-old Sarrou.

Perhaps even more striking than the victory of Sarrou, who had never won a World Cup medal or World Cup competition, was who missed the victory: top favorite Nino Schurter. The Swiss is eight-time world champion, he won the previous five editions in a row. In Leogang he finished ninth, the worst World Cup result of his career.

A few hours after the game, there is hardly any disappointment in Vader. He is in an analytical mood and is already figuring out what he could have done better in his preparation. He likes that. ‘Finding the balance, that’s the great thing about top sport.’ He sounds cheerful. ‘Now I am going to face it, but I can only learn from that.’

For Anne Terpstra, the World Cup mountain bike ended in disappointment. She started on Saturday as number 1 in the world and went on the hunt for the first World Cup podium place ever for a Dutch mountain biker. But after two laps, the rider, who recovered from corona earlier this year, dropped out with asthmatic complaints. “Anne said she couldn’t breathe at all,” said national coach Gerben de Knegt. She almost seemed to be hyperventilating. Anne has had asthmatic complaints more often in the past, but that was during the pollen season. She didn’t really understand it herself either. ‘