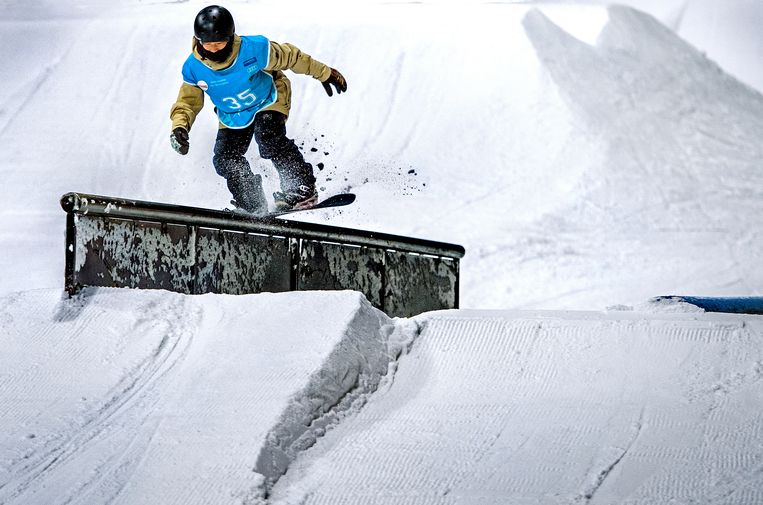 Ryan Rausch occasionally rubs one of his Chinese athletes warm. ‘Is it going well?’ The Canadian snowboard coach is dancing with his pupils. “Oh-ho-ho-ho.” He stops, coincidence or not, just before Justin Bieber sings ‘I’ll be fucked up if you can’t be right here‘. And he looks them in the eye: ‘Are you happy?’

The experienced coach feels, he says, a bit like Tom Cruise. ‘We are on a mission impossible‘, he laughs at the top of the Snowworld indoor track in Landgraaf. He has only recently been a trainer of the Chinese Slopestyle talent team and the hope is that some of his pupils will make it to the Olympic Games in Beijing.

Landgraaf is a necessary stopover for this, the Chinese themselves took the initiative for this match on Thursday and Friday. To qualify for the Word Cups, and ultimately the Games, snowboarders need points from the International Ski Federation (Fis) which can only be earned at lower international competitions. Because they were unable to travel due to corona and were unable to organize competitions themselves, the Chinese are trying via a Limburg shortcut.

‘They approached me a while ago,’ says Martijn Oostdijk, a Dutchman who works at the Fis. ‘There are not many places where you can organize competitions at the moment. Glaciers can be quite haunted this part of the year. It is never canceled here and points are guaranteed to be awarded.’

For example, a delegation of about thirty Chinese, about half of whom were counselors, settled in Landgraaf. The competition is under the flag of the Dutch ski association, but the Chinese reimburse the costs.

‘This is a small world’, says Oostdijk. ‘It happens more often that countries knock on each other’s doors, if we can help people, we are happy to do that.’

De Fis also knows that winter sports in China are developing enormously. The Communist Party has made that a priority: the goal is to get 300 million Chinese into winter sports, hundreds of resorts have been built.

‘The Chinese market is of course huge, if we open it up we help the sport,’ says Oostdijk. ‘The Games are important in that regard. And then it helps if a lot of Chinese participate.’

In addition to the Chinese, about ten, mainly young, Dutchmen came to the match in Landgraaf. And also three Icelanders, a Brit, a Belgian, three Greeks and the 16-year-old Brazilian Augustinho Texeira.

“We were stuck in Canada for a year,” said his Canadian coach James Gallagher, who met his pupil at the Olympic track in Calgary. The Brazilian Olympic committee asked if they wanted to travel to Landgraaf. “This part of the season is all about the points. This is one of the first possibilities.’

Texeira has been in the snow since he was 3, especially in neighboring Argentina. The hopes are pinned on the last World Cups of the season, the top players are already qualified and probably no longer participate. “We only have to make it to the top 16 once,” Gallagher keeps the Brazilian Olympic snowboard dream alive.

Rausch – called ‘Chinese Ryan’ by his compatriot – was approached after the Games in Pyeongchang to coach the Chinese halfpipe team. Half pipe, big air and slopestyle (with obstacles) are the three snowboard disciplines where tricks are judged by a jury. Because the Chinese slopestyle coach has asthma and cannot travel, he is now on the track in Landgraaf. The team consists of talents, the Chinese toppers have private trainers.

“The difference with Western athletes is that they are in the snow from an early age,” says the Canadian. “The Chinese come into this sport as athletes.”

All his pupils have a background in gymnastics or kung fu. In those sports they were not good enough to make it to the top, now they can try it in the snow. It is no coincidence that Rausch, who has also mastered Mandarin, regularly asks if they are ‘happy’.

‘They grew up in a system where their coaches tell them how they do it,’ he explains. ‘And often mainly what they do not do well. Very little they do well. I try to match their feelings with what they do. So that they know for themselves whether something is good or bad. Did it feel good? That’s what I want to know from them.’

He keeps a low profile about his feelings about this group. “I’ve been working with them online for a while,” says Rausch, who is married to a Dutch woman and lives in Amsterdam. ‘That actually works quite well, they have already made a lot of progress. But now for the first time I see them at work in the snow.’ Who will we see in Beijing next? The Canadian laughs, but doesn’t answer. “Sorry, I have to get back to work.”