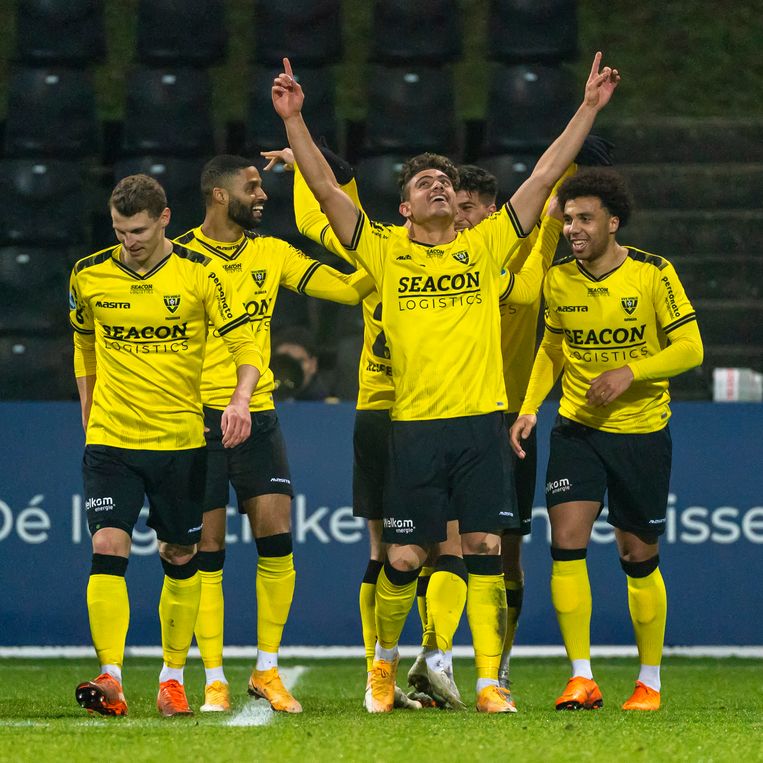 The premier league is a sensation richer. Georgios Giakoumakis scores continuously at VVV-Venlo. On Wednesday, he was good for four hits against Vitesse (4-1), bringing the Greek’s goal total to 20 goals after 19 premier league playing rounds.

The story of Giakoumakis is one for the football romantic. An anonymous 26-year-old striker, who was at a dead end in his own country, ends up in Venlo one day, and then suddenly does what he has been dreaming of all this time as a footballer: scoring, scoring and scoring again.

Before coming to Venlo, Giakoumakis is not known as a goal machine. Left in just one season Giakou score more than 3 league goals. In 2016/17 he scored 11 goals for Greek mid-engine Platanias. Enough to force a domestic transfer to top club AEK Athens.

Giakoumakis is struggling in the Greek capital. Due to injuries, loss of form and competition, he quickly loses his status within the selection. In a year and a half he comes to 17 league matches for AEK (of which 15 forays in) and only 1 goal.

Rental periods will follow. First to OFI Crete, in his hometown Heraklion. The following season he is loaned to Górnik Zabrze, a modest club in the Polish Ekstraklasa. Here too Giakoumakis does not often get to his favorite activity: he scores 3 times in 12 duels.

Yet Stan Valckx, technical director of VVV-Venlo, sees it already in the Greek striker. ‘Based on statistics, we didn’t make it, no. But when we were offered it via our network, the images were actually immediately appreciated. Giakoumakis has power, depth, he works hard and has already shown at Platanias that he knows how to score a goal. ‘

Valckx traveled to Poland to see Giakoumakis in action. ‘Statistics don’t say everything either. You need to talk to a guy like that before you go into business with him. To find out what drives him, what his personality is like. He also made an impression in that area. ‘

The many goals of Giakoumakis for VVV stand out. He soon caught the attention of John van ‘t Schip, the national coach of Greece. In November, three months after his transfer to Limburg, the Dutch trainer makes him debut in the national team.

Van ‘t Schip was already familiar with the striker:’ We saw him when he played for AEK. But there he was not a basic player, he was usually like pinch-hitter used.’ The national coach is therefore very pleased with how Giakoumakis is developing in the Netherlands: ‘Just at the point – around his 25th – that a certain label can be placed on such a boy, because the goals have not been scored, everything suddenly stands out. his place. ‘

Giakoumakis is not the only premier divisionist in the national selection. Pantelis Hatzidiakos is also a Greek international. The AZ defender is impressed by his new VVV colleague. ‘He really is a pure finisher, only on the hunt for goals. If he has made three, he will still hunt for number four, five or six. He really lives for goals, like Van Basten used to do. ‘

A pure goalkeeper from Greece, so. The comparison is quickly made with former Vitesse and Ajax striker Nikos Machlas, also from Heraklion and Giakoumakis’ childhood hero. But opposite VI Giakoumakis says that he thinks his own style is more like that of another Greek premier division striker from Roda JC and Ajax: ‘Machlas was more agile and faster. I’m more like Yannis Anastasiou. He was always present in the sixteen, difficult for opponents and had a feeling for the right place. ‘

That Giakoumakis is a pure ‘sixteen meter area striker’, the figures from statistics agency Opta Sports also show. The goal getter rarely participates in football. Giakoumakis was not involved in any of his 20 goals in the run-up to the hit. The Greek is purely the deadly finisher. 18 of his 20 hits came from shots within the penalty area, as well as 56 of his 65 goal attempts.

After the break, Giakoumakis heads in his fourth of the game against Vitesse on Wednesday evening. Goal number 20 of the season, and that in his 19th game. Only one player in the history of the premier league faster to a total of 20 goals. In 1956/57, the first professional season in the Netherlands, DOS striker Tonny van der Linden needed one less match than Giakou to get to the magical limit of 20.

He has almost achieved another historic achievement – with a lead of 9 goals on the three numbers two on the top scorers list this season. After Björn Vleminckx (23 goals at NEC in 2010/11), Giakoumakis can become the second top scorer from the right row of the premier league in the last sixty years.

Giakoumakis personally makes the difference for VVV between a season in relegation danger or, as is the case now, staying in the safe middle bracket. His 20 goals yielded 16 profit points for the Venlo team, who are currently on 22 points.

The Greek is good for 62.5 percent of VVV’s 32 hits this season. Only once in the Premier League’s 65-year history did a player finish the season with a greater share of his team’s goal production. That was 59 years ago, when Frans Rutten accounted for 25 of the 35 hits of Rapid JC Heerlen.