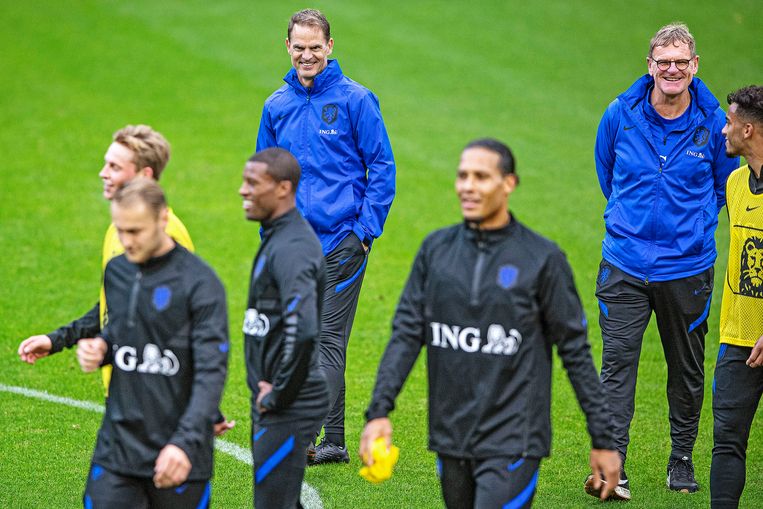 So this is how Monday goes in Zeist. First the welcome talk from the new national coach, Frank de Boer. Introduce. Then testing for the virus, for the umpteenth time with the pros. Talk to the press, who are obliged to wear masks on the KNVB campus. Captain Virgil van Dijk: ‘You have to look after yourself very much. We have already had corona cases at the club. ‘ How is that possible, with all those bubbles? ‘No idea. Children go to school. They can also infect you at home. You do not know. Face masks, wash your hands, keep your distance, you do everything to stay healthy. ‘ They have been tested so many times and yet the virus is creeping through the cracks.

They have all come to Zeist, the internationals, from all over the world, and that is already quite a lot, with teams all over Europe that are all going to be quarantined. The sport zigzags between the hurdles and threats of the virus. Frank de Boer mainly observes during the first training, when the downpour has just disappeared and a faint sun illuminates the sky. “I’ve got a helicopter view.” The arms are sometimes placed in front of the chest, or else the hands are folded together on the buttocks. Every now and then he puts them in the pockets. Assistant Dwight Lodeweges talks and explains.

Behind the table De Boer laughs at the slip of the tongue of a reporter who calls him Ronald. Then the cameras rattle to capture the alternative to the frown of thought. It is also the end of the transfer market on Monday midnight, and a day later in the Netherlands. De Boer himself disappeared in 1999 with brother Ronald from Ajax’s training camp, when they signed a contract with Barcelona at the last moment. When he speaks on Monday, it is still unclear whether Memphis Depay will leave for Barcelona. Then Dembélé must first be sold. ‘Memphis is just here’, De Boer notes before the training.

Others, who have just transferred, have yet to find their way. Van de Beek hardly plays at Manchester United. “Donny has to find his place.” Calvin Stengs, son-in-law of De Boer, takes the place of the injured Mo Ihattaren, while Stengs is suspended after a red card at AZ. He has also been called up because he represents ‘the future’. Goalkeepers then. Jasper Cillessen is reserve at Valencia, Tim Krul plays in the Championship with Norwich and Marco Bizot from AZ blundered like a pupil in the spectacle against Sparta on Sunday, but De Boer does not want to ‘settle’ him immediately. Kevin Strootman is also still in the selection. He hardly plays in Orange, but he is still important in group activities, De Boer knows from tradition.

That’s how everyone came up with their own story. Atalanta is doing great, Liverpool got a merciless suit on Aston Villa’s pants (7-2) and have already conceded eleven goals in the competition. Defender Van Dijk will of course be asked whether the hunger is gone, after the victory in the Champions League and the championship. ‘No. Above all, we must now remain calm. This can never happen again.’

Almost everything has something strange, and then there is also the salient discrepancy between the game against Mexico, Wednesday in the Arena, and the games in the Nations League. Only a few TV reporters and a journalist from the ANP will go to Bosnia (Sunday), because those who return must be quarantined for ten days. The match against Italy is in Bergamo, the unofficial capital of Corona in the spring.

The duel with Mexico is a commercial splurge, part of the KNVB’s earnings model, partly stripped of value because no audience is allowed. The duels with Bosnia and Italy are more important, but the match against Mexico is De Boer’s debut, so that is of emotional value to him. He will save players, also at the request of clubs. And Hirving Lozano of Mexico is not participating at all, because he is not allowed to leave Naples because of corona. In those circumstances, De Boer will try to continue the line of Ronald Koeman. Van Dijk nevertheless: ‘We are looking forward to it.’